In one of our caves under the winery, we prapared a place for aging  some of our special wines. 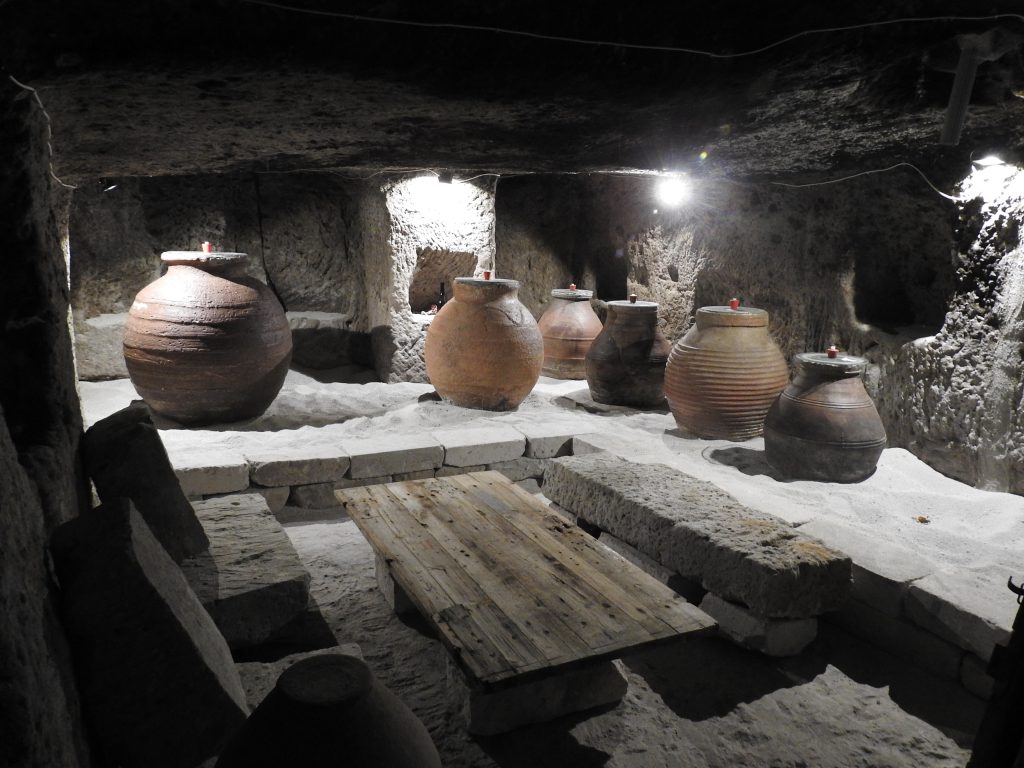 Mehmed Gürs, owner of the famous  Mikla restaurant in Istanbul came with his team to take shots and interviews for his TV serie “Feeding your Soul”.   We all had a very beautiful day 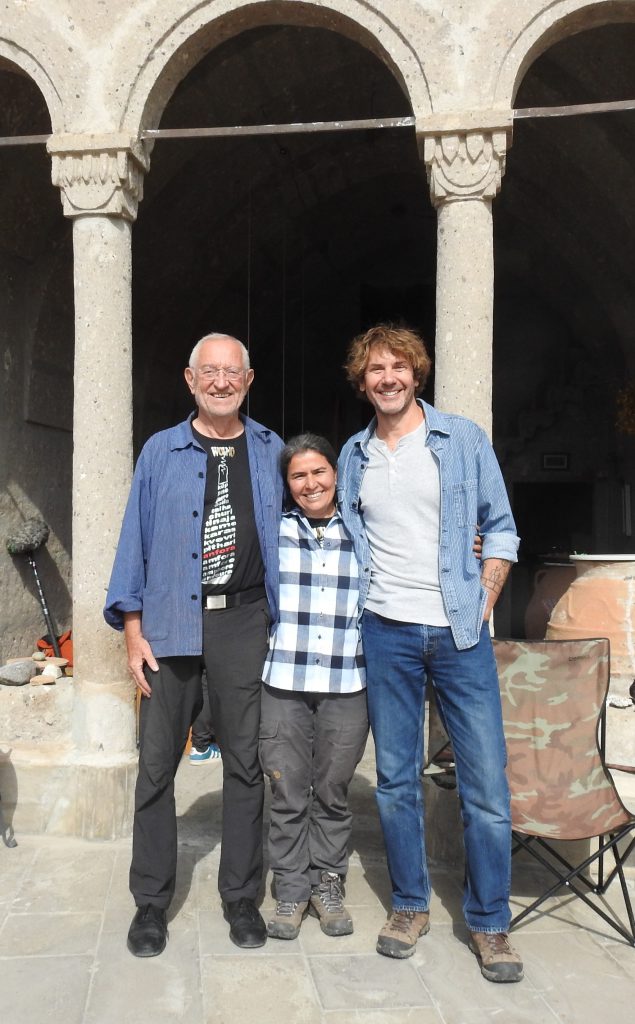 We planted In October 2017 the first original Hasan Dede vines in our vine yard. Now, one year later, a few grapes have already appeared. Our Hasan Dede vines are growing on their own rootes and are Phylloxera-free. 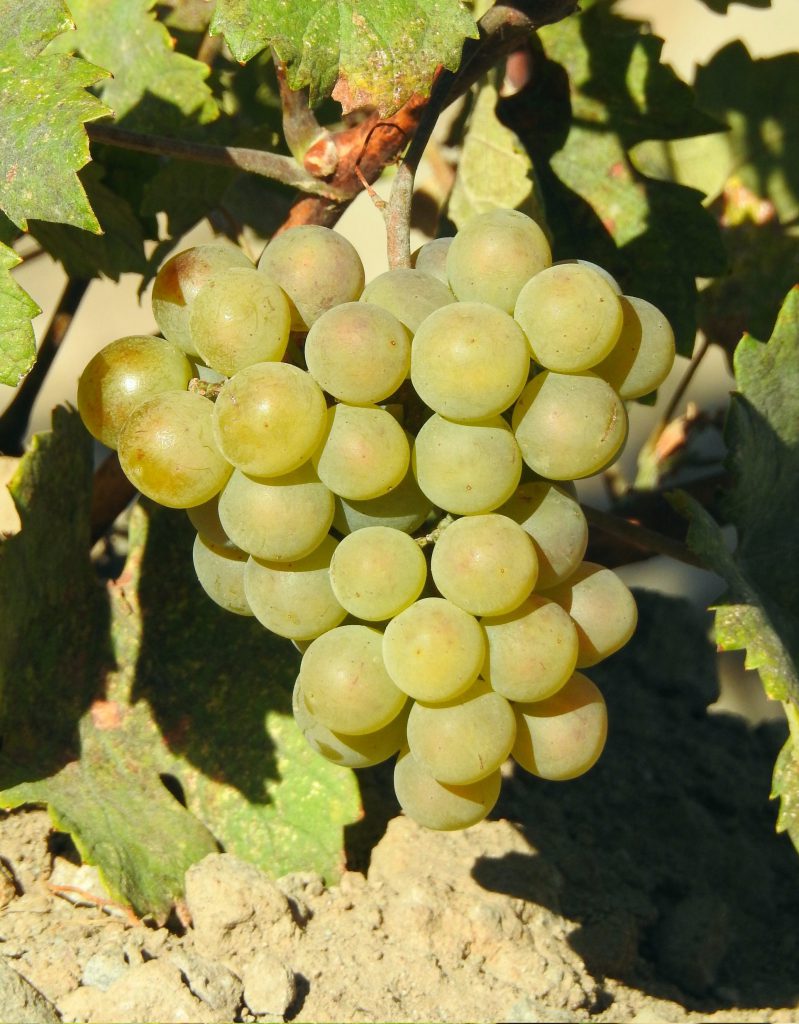 16. September 2018   The photographers  Keiko & Maika  visited our Wine-Manufactur.  Together we started the grape harvest 2018. 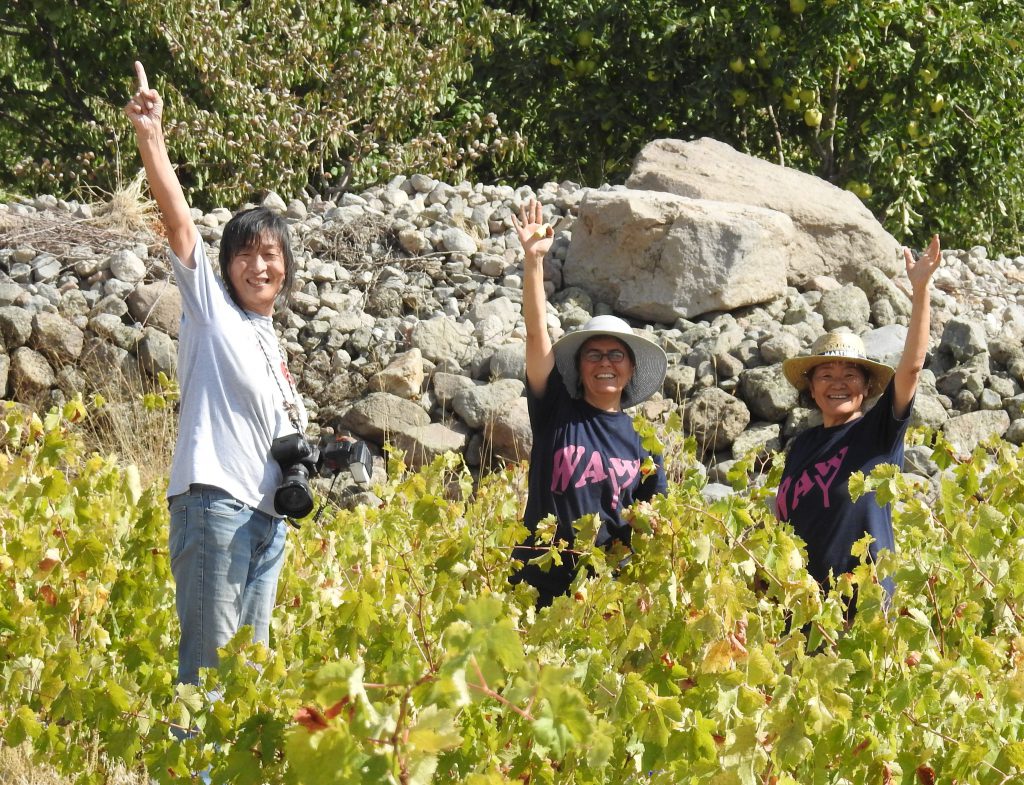 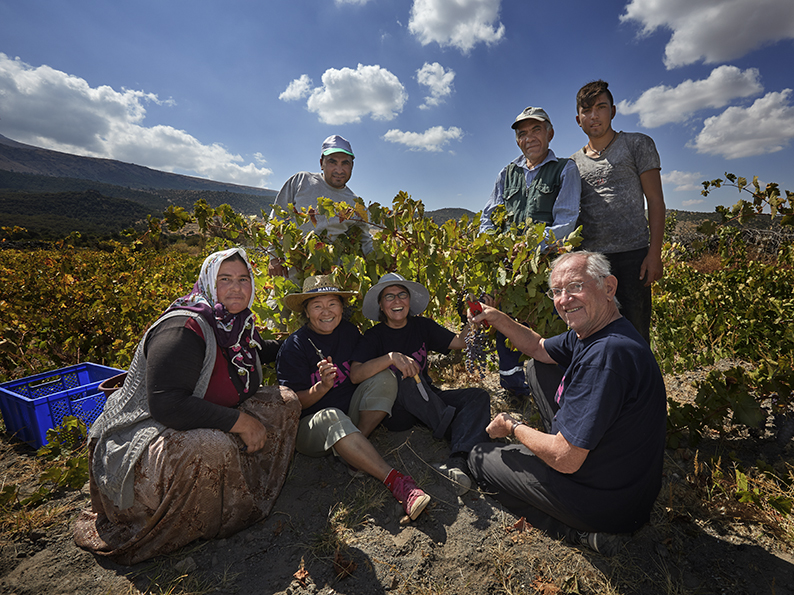 Together with Keiko und Maika we started an international WOW project. Some selected grapes from our wine yard are directly filled in a Küp. Shortly after the fermentation has started, we will close the küp and will waite for almost 6 month. During our Dionysos Festival in in April  we hope to get from this küp a pleasant natural wine. 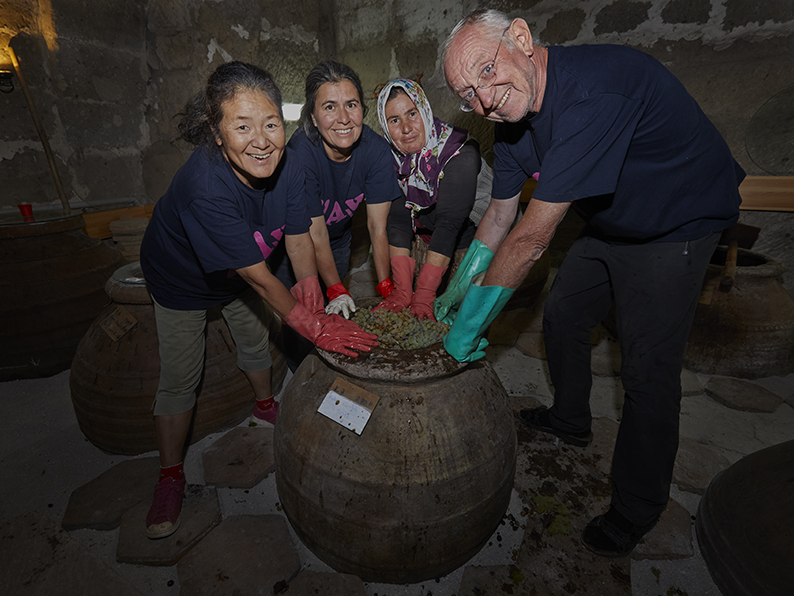 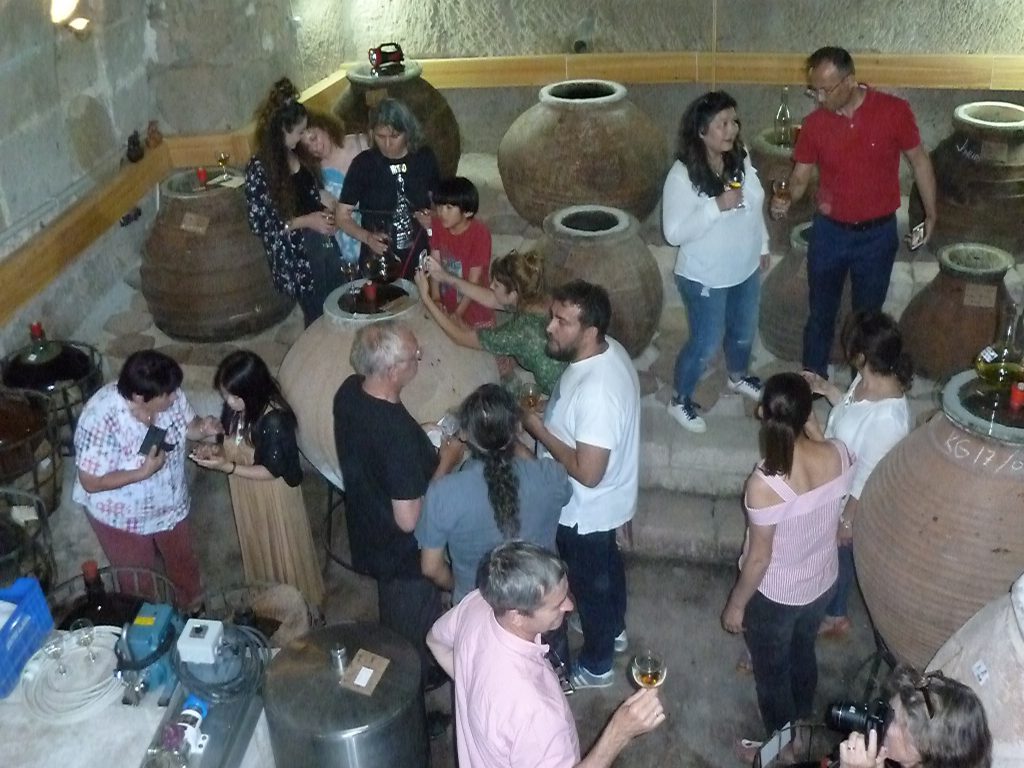 On the occasion of 3rd. Dionysos Symposium we opened our küps to taste and discuss our 2017 wines for the first time. All our 2017 wines except for one had rested on their skins, seeds and stems for nine months. 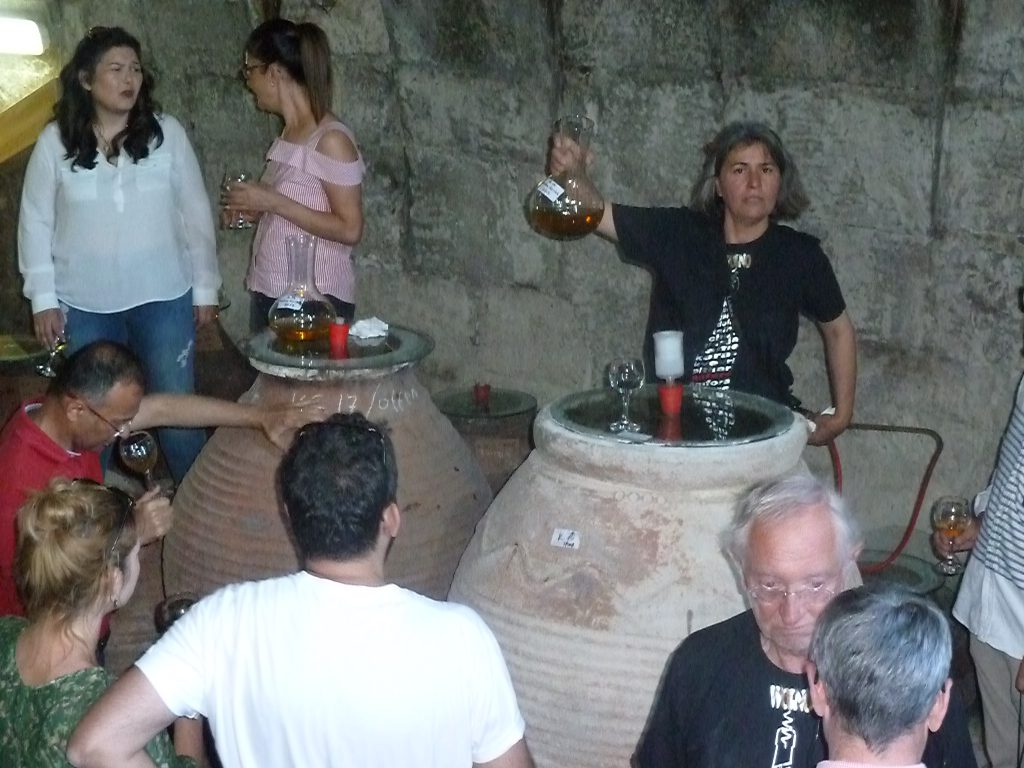 Our amber-colored “Hasan Dede” attracted particular attention. It is produced from authentic vines growing on their own rootstock. Our program to save the original “Hasan Dede” vine has now shown first positive results

Major topics of this year’s symposium were: biodiversity in the vineyard, phylloxera, and the preservation of original phylloxera-free grape varieties. 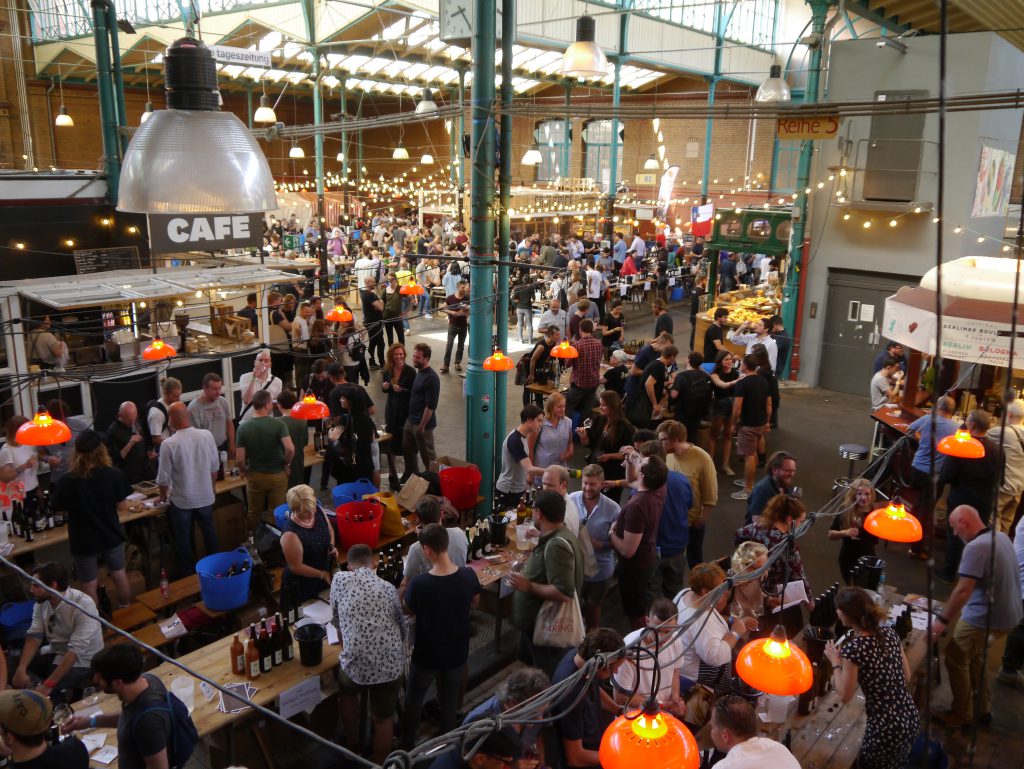 We had many interesting discussions and acquired new customers. 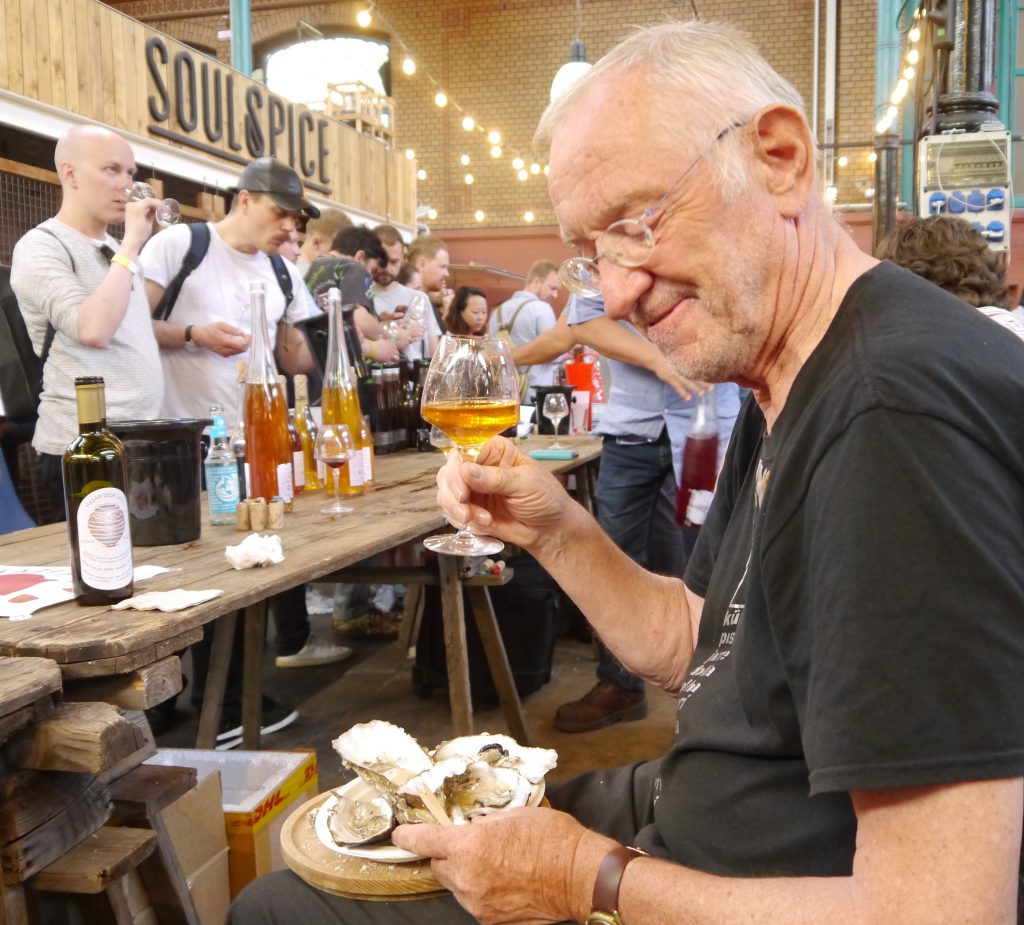 The ambience was excellent. 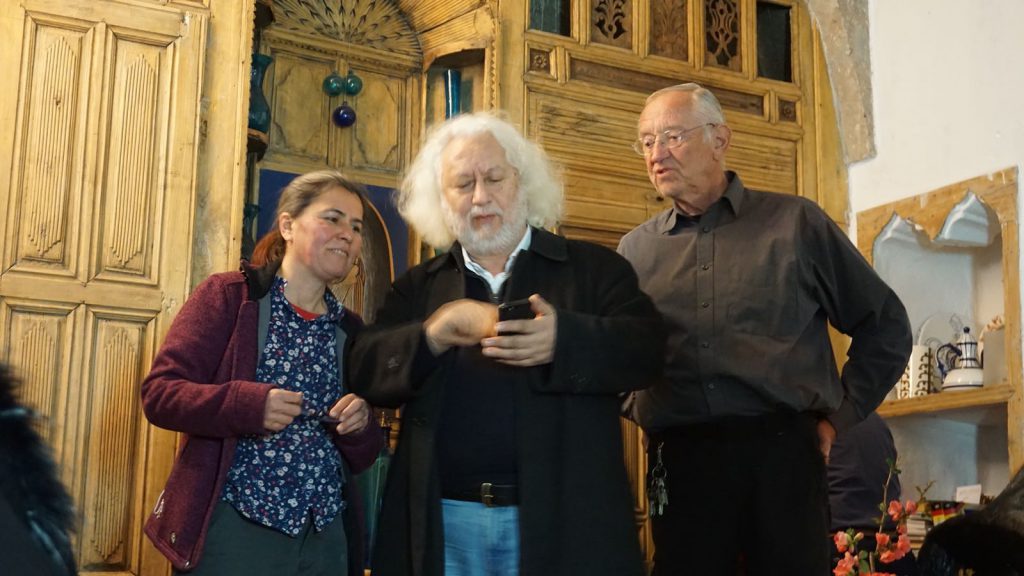 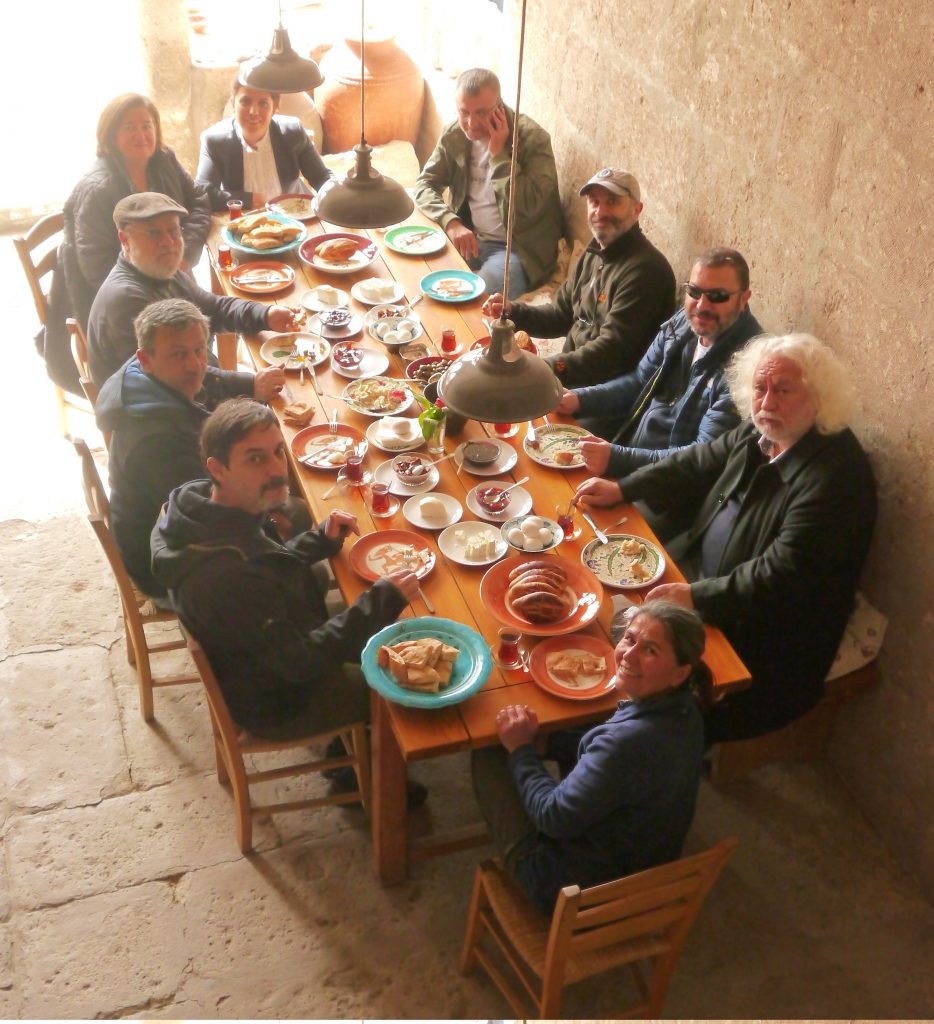 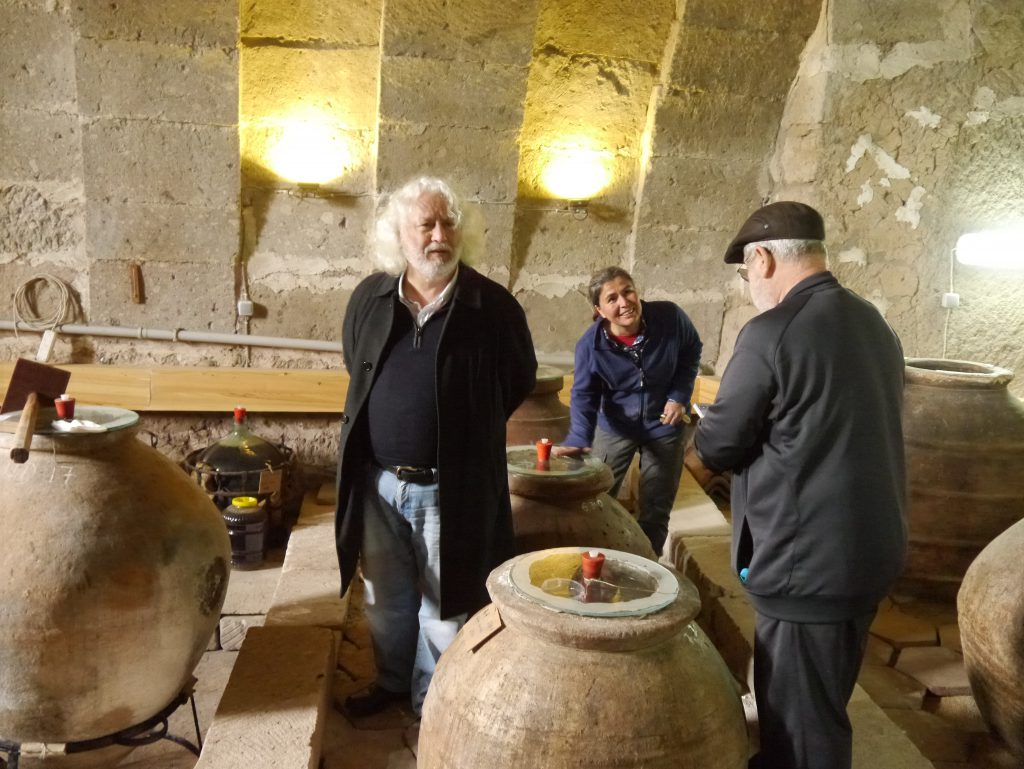 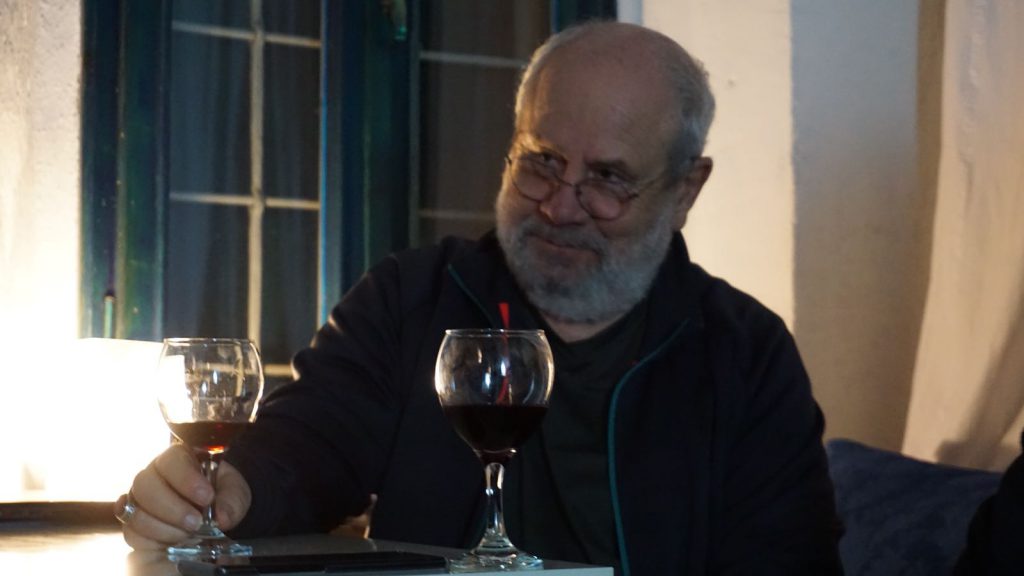 Our white “Keten Gömlek” 2014 was awarded with a gold medal by PAR Wine Award International.

Our amber-wine “Hasan Dede” 2013 was awarded with a silver medal. 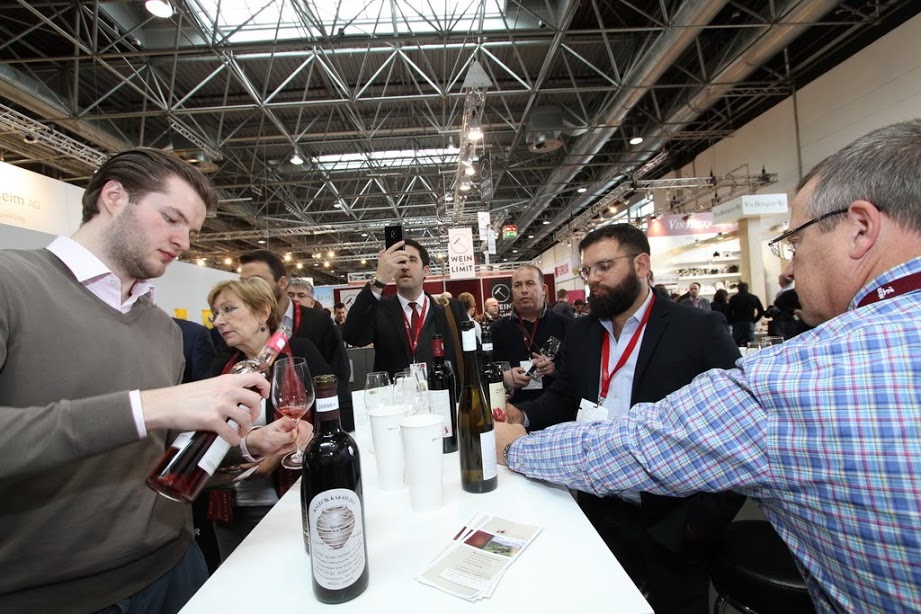 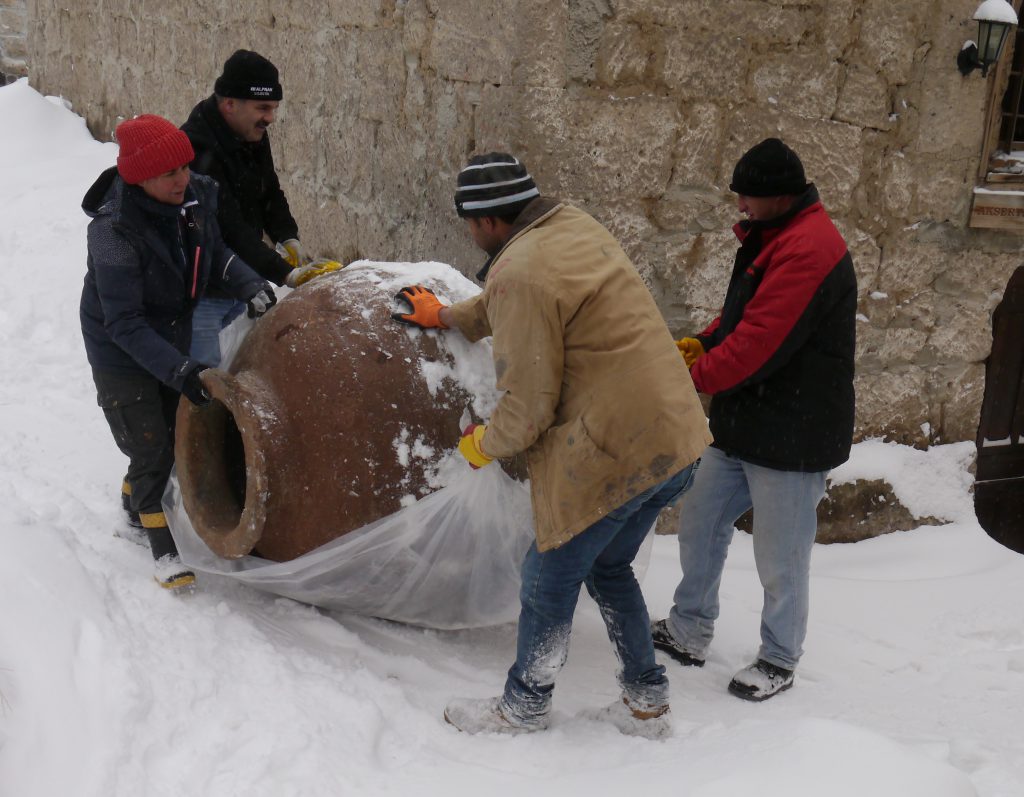 Transporting the küps is more often than not a rather difficult task, because the lane leading to our wine-cellar is extremely narrow. This time, however, we are lucky: there is thick snow everywhere so that we can easily drag the küps on a plastic sheet over the snow. 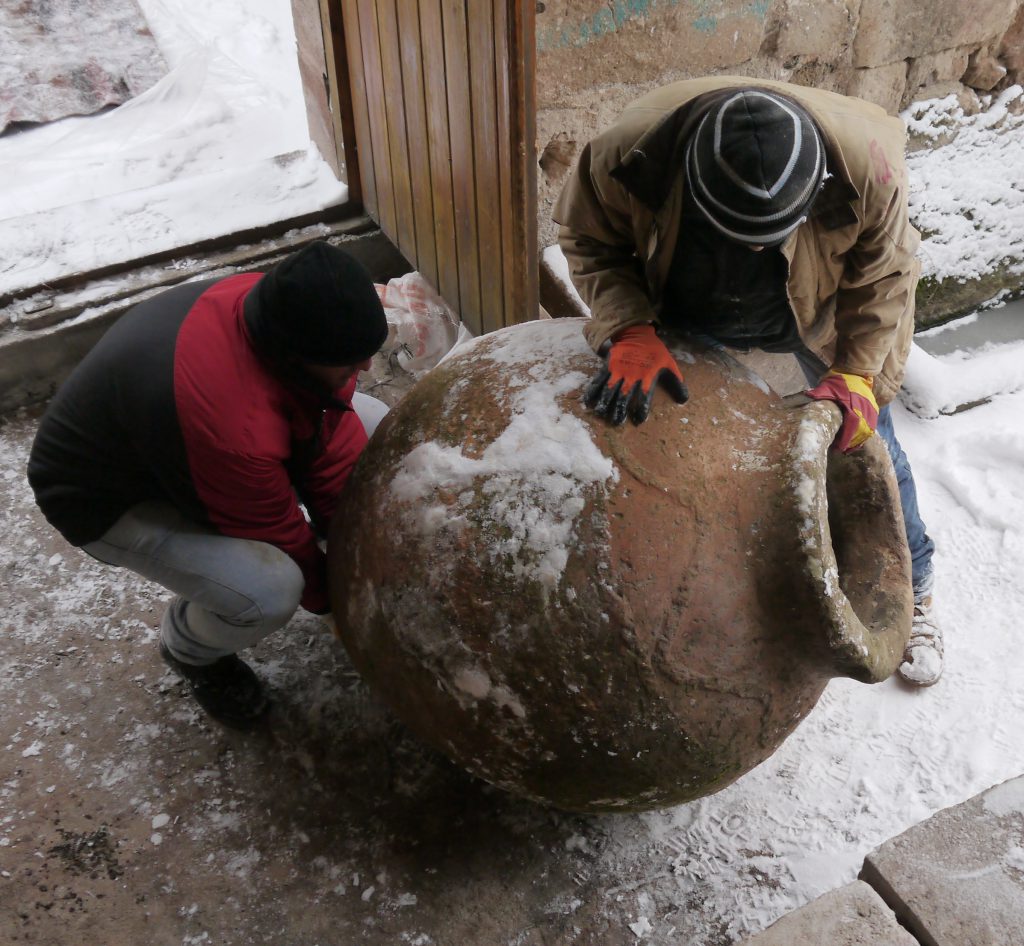 We deposit both küps in our vaulted work place until springtime when I am going to restore the inside surfaces. 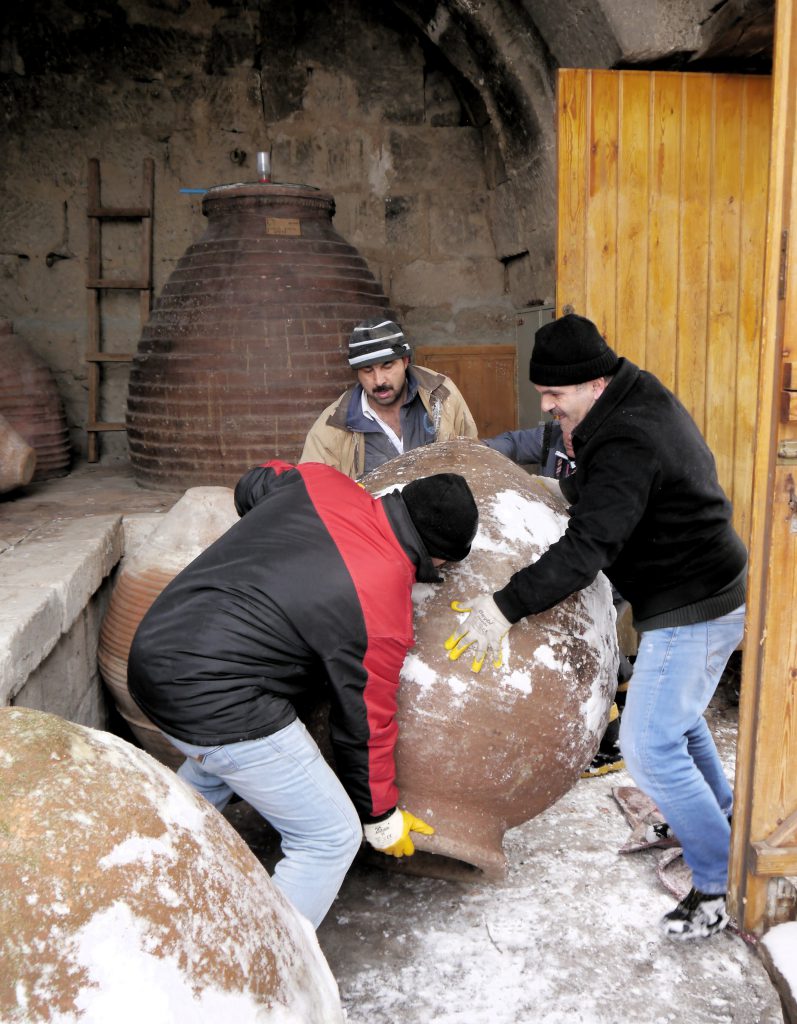 We will probably use them for maturing some wines

We process 750kg grapes to 170 liters pekmez (concentrated grape juice). We always work until late in the night because the grape juice has to simmer on the log fire till it has reached the consistency and clarity we require. 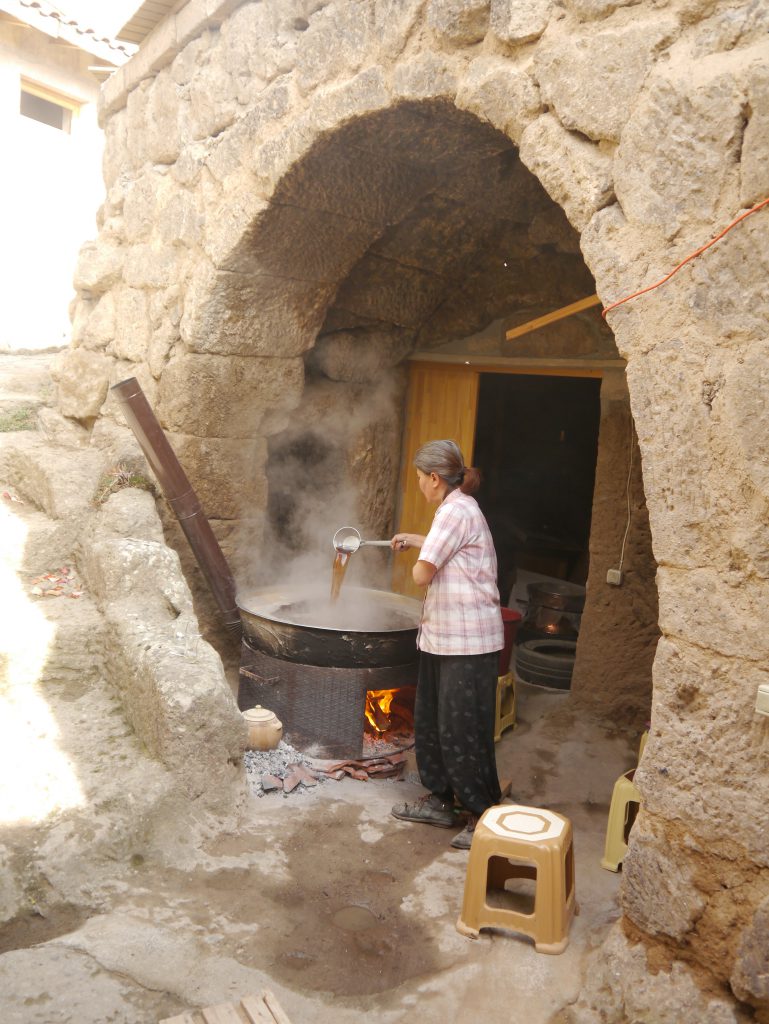 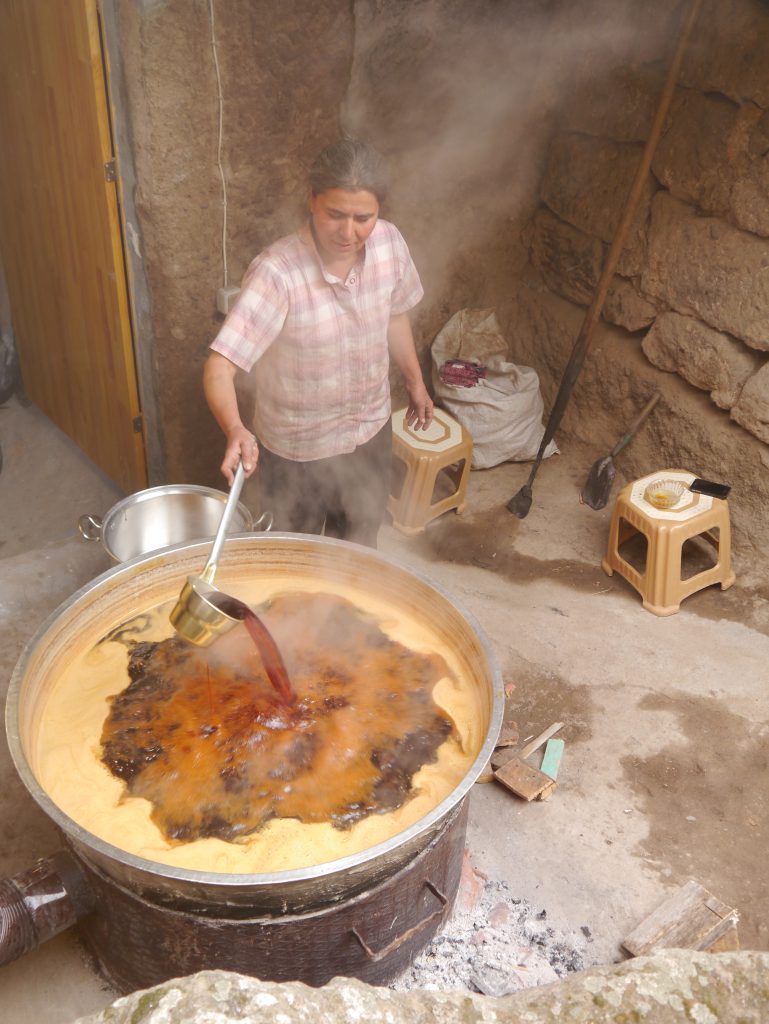 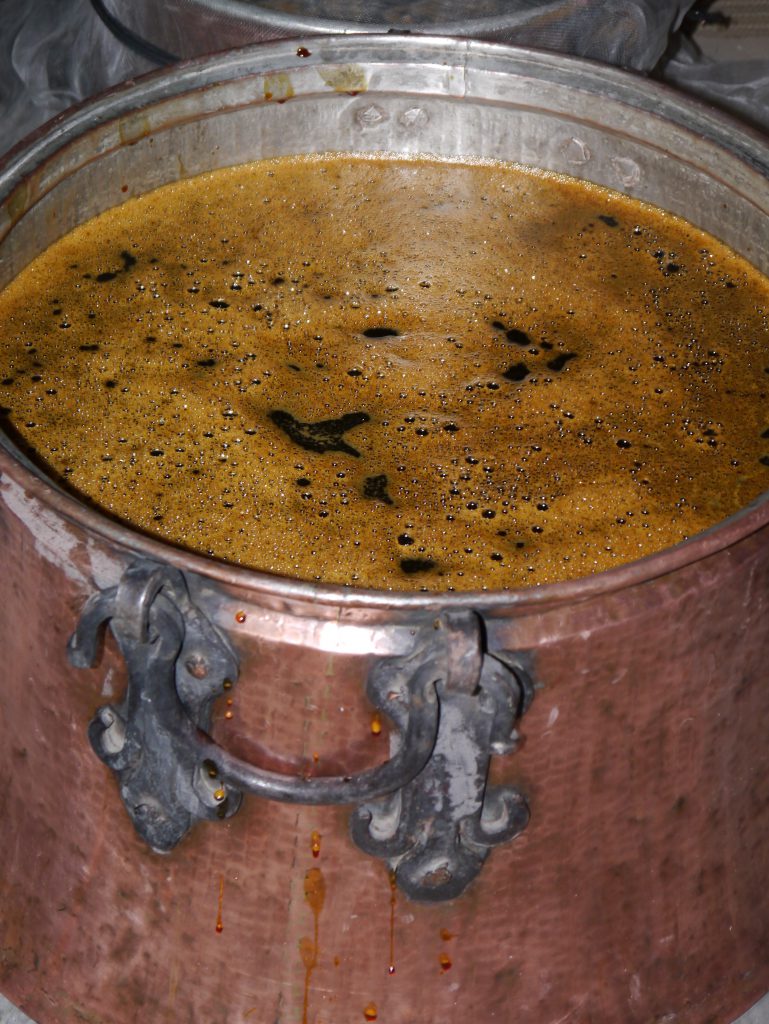 Sabiha Apaydin, her husband Gökhan and their one month old future sommelier daughter Sera.
Our new vineyard was planted with cuttings of the authentic Hasan Dede vine, without American rootwood. We have already pondered the first wines from this garden.

The popular food journalist Nigel Slater visited us in Güzelyurt with his BBC 2 film group.   He tasted the cave-matured “Cökelek Peynir”, together with Hacer Özkaya who makes this cheese once a year from goat’s milk and then transfers it to clay jars in which it matures for up to seven years. The cheese tasting was accompanied by wine tasting of our very first amber-colored “Hasan Dede” wine from 2013.

An international fair in Bra every other year is dedicated to ecologically produced cheese. In cooperation with the wine dealer Velier S.p.A/ Triple A we presented our “Cökelek Peynir”, i.e. our goat’s cheese matured in a clay jar for two to five years, as well as our natural küp wines

Medium-sized clay casks for wine and olive oil are still manufactured on Crete. We visited a pottery in Trapsano where we watched the master and his son at work. While the father is sitting on the floor, slowly turning the potter’s wheel, the son is shaping the new cask from above

The Mzwiwani grape had become so rare in Kakhetia that the association for the preservation of rare grape varieties planted a number of cuttings at their places of production. The first grapes were harvested and fermented into wine three years later. Twelve bottles of wine were gained.

We have tasted this wine together with Soliko Tsaischvili and Irakli Pruidze. It is an “Orange Wine” of delicate and slightly strong texture, worth to be saved. It is already a brightly shining comet at the Georgian wine-heaven.

Together with Soliko Tsaishvili and Irakli Pruidze  we have tasted several “Kvevri Wines”. The white “Rkateseteli” 2015 from the famous  Kakhetian  vineyard “Tsarapi” and the red “Saperavi” 2015 from the Kakhetian vineyard “Akhoebi” are kvevri- wines that can hardly be topped. We are including them in our marketing concept “Wine from three kvevris” for Europe from July 2017.

The village of Hasan Dede near Kirikale was popular for its white grapes over a long period of time. However, the grape producers lost their clients when the largest grape processing firm closed down. By and by the vine areas were being used for other purposes. Today there are only very few gardens with authentic Hasan Dede grapes without American ground wood.

On 19 April we visited Hasan Dede where we found a stock of good and partly very old vines. 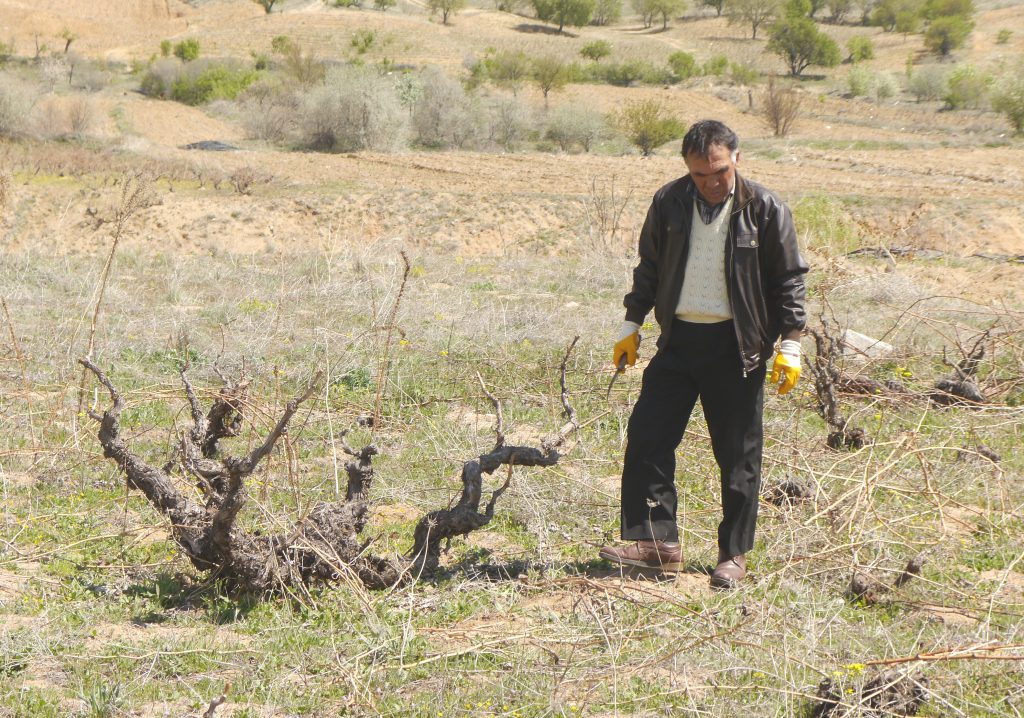 Our partner Adem and his co-workers are looking for good old vines of Hasan Dede grapes and selects appropriate cuttings. 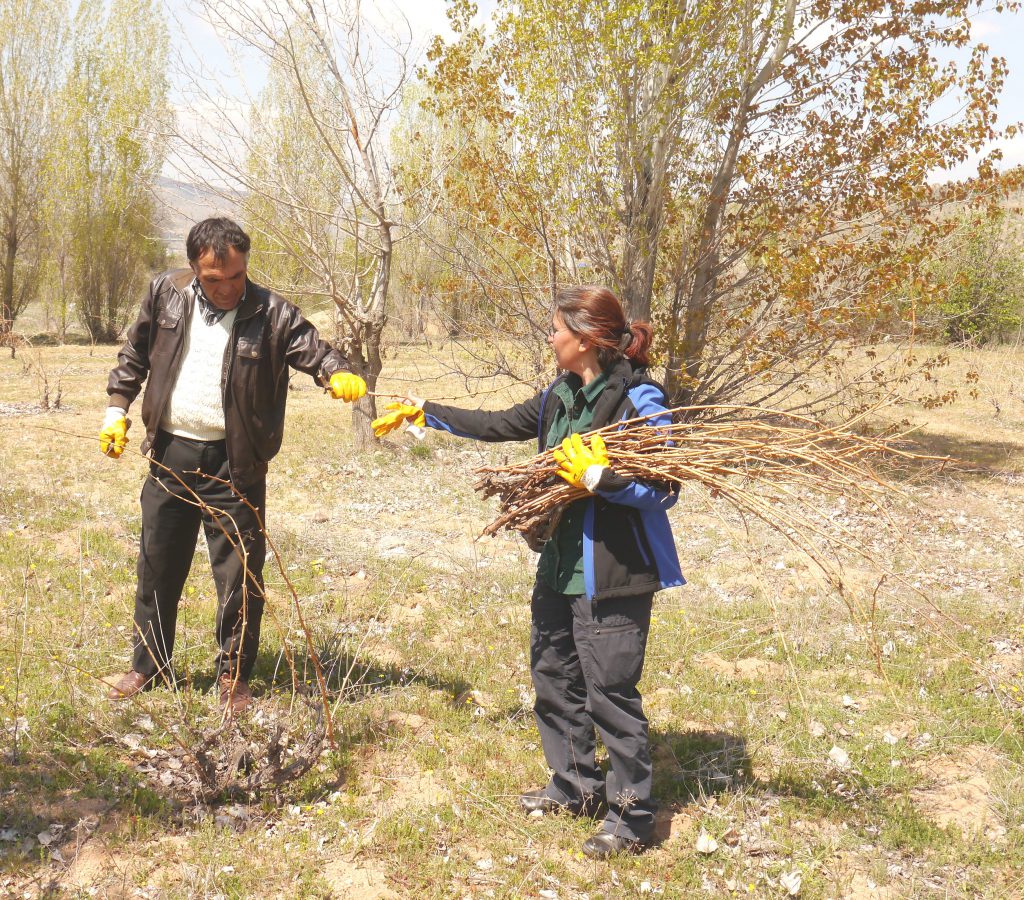 A small piece of “old wood” is taken, along with the cuttings. This method ensures that the cutting can grow new roots quickly and thus develop well. 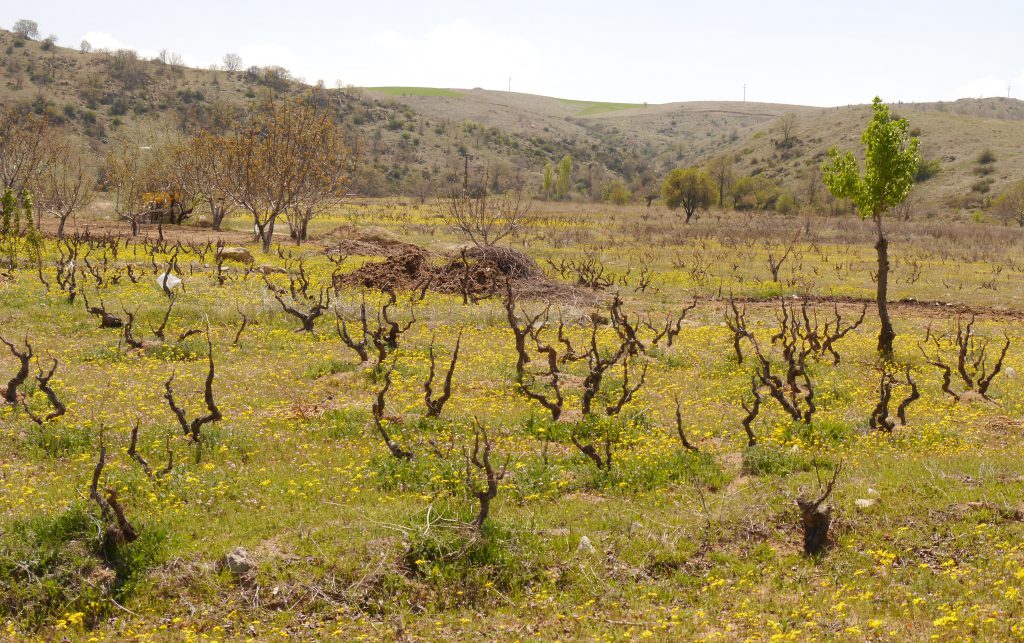 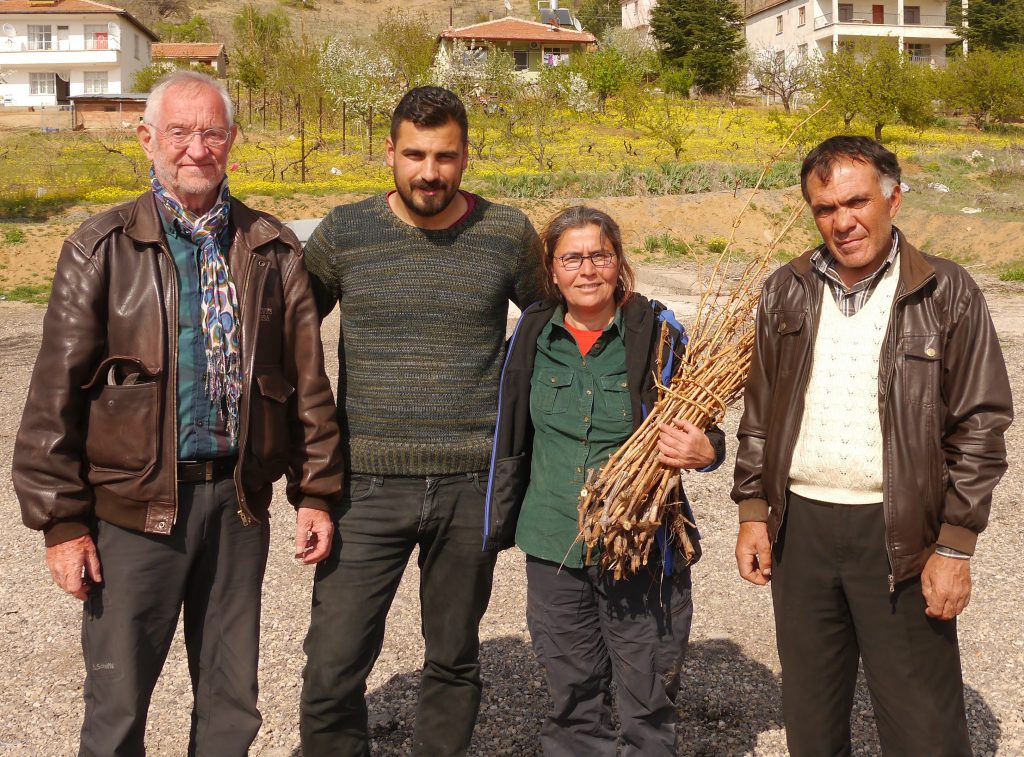 Udo, Arif, Hacer, Adem with cuttings for replanting about 800 vines on the slopes of Hasan Dag.

The 2nd Dionysos Symposium on 8 April came with heavy snowfalls 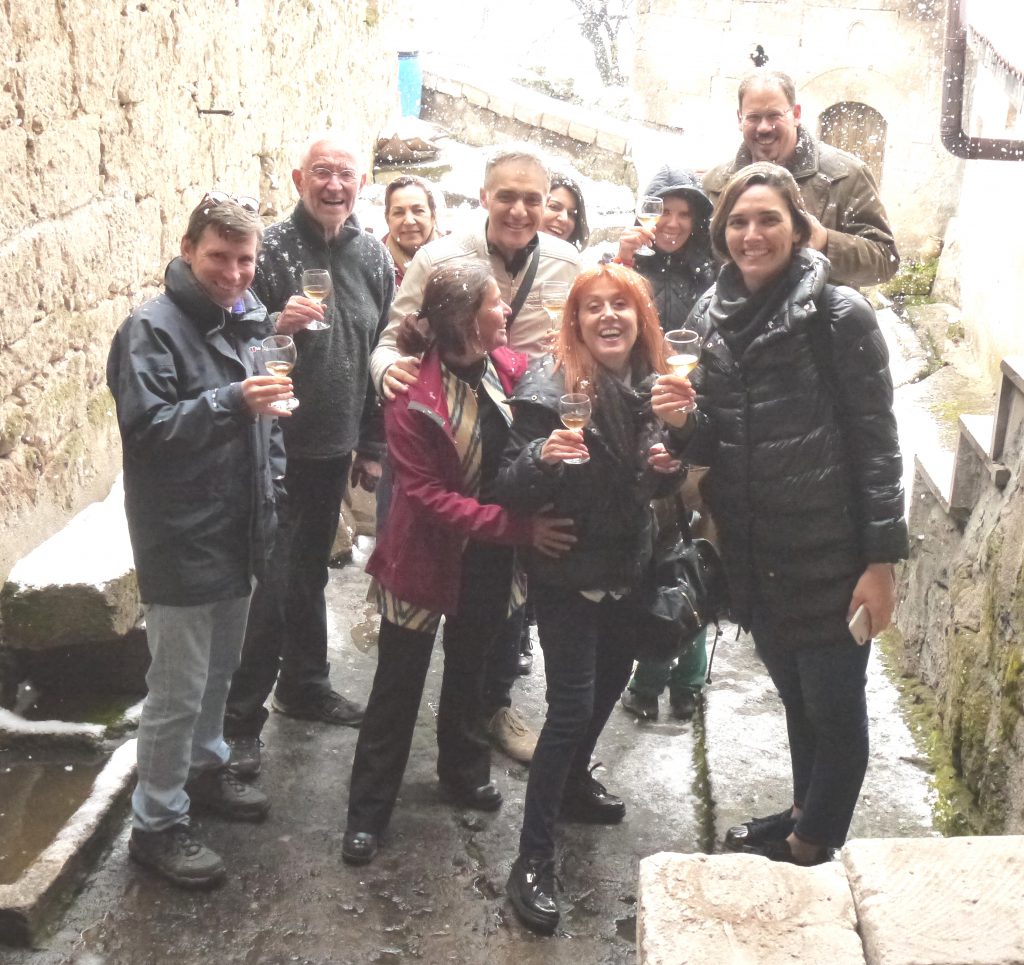 Despite the rather low temperatures our 2016 “Kalecik Karasi” was welcomed with great enthusiasm. 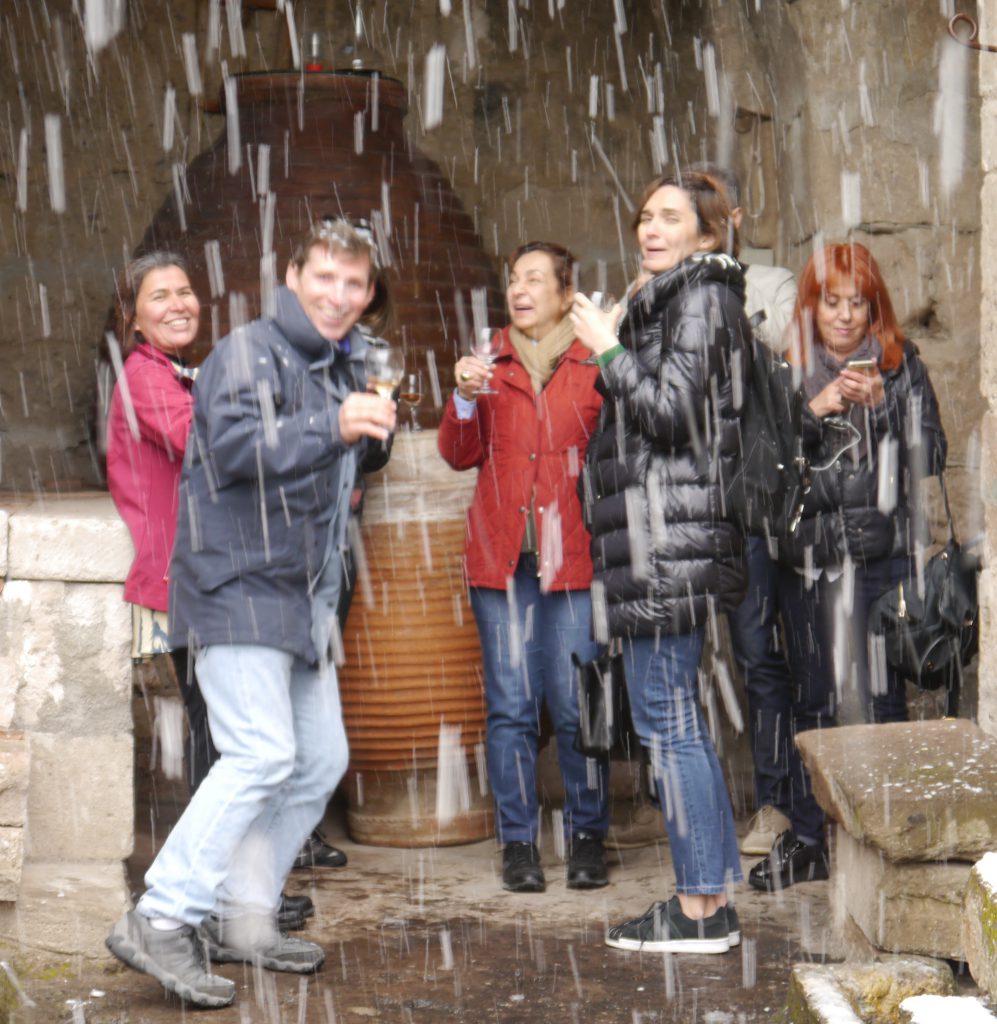